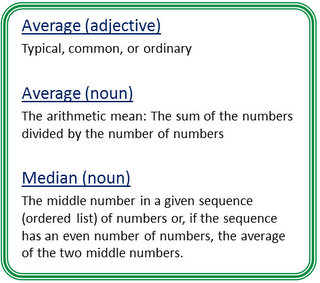 In my last blog entry, I discussed average NFL salaries.  I had initially hoped to talk about median salaries but, with my limited internet searching skills, was not able to find enough information about the history of median NFL salaries.


When analyzing data, why do we often focus on the median instead of the average (mean)?

The fact is that the average (mean) is not always so average (typical).  If we want to get a good picture of what a typical NFL player makes, we should analyze median salaries.

As an example, let’s look at the salaries for the 2012 Indianapolis Colts.
This team is somewhat of an anomaly because they have the highest-paid player in the league (Dwight Freeney) and the lowest total team payroll in the league.  This makes the Colts an exaggerated microcosm of the NFL – a league in which most players earn a high salary, but a few players earn an insanely high salary.

So, how much money does the typical player on the Colts earn?

If we use average salary (rounded to the nearest dollar) the answer is $1,469,115 – but is this really typical?  43 players, representing78 percent of the team, make less than this amount.

The average salary is artificially inflated by the top-earning players on the list.  If we take the top three salaries (Freeney, Bathea, and Mathis) off of the list and recalculate the average, it becomes $957,526 (again, rounded to the nearest dollar).  Removing three players caused the average salary to decrease by about 35%.

It seems more reasonable to use median salary and state that the typical player on this team earns $622,278.  This amount is not artificially inflated by the top earners on the list.  If we remove the top three salaries, the median becomes $615,000.  This number is about 1% lower than the original median.

If the example of the Colts does not convince you that median is the better way to go, consider this example:

A group of one hundred people decide to look in their wallets to see how much money each person is carrying.  Ninety-nine of the people are carrying $1 and one person is carrying $1,000,000.  The average amount of money per person is $10,000.99 ($1,000,099 ÷ 100).  Does this mean that the typical person in this group is carrying over ten thousand dollars in his/her wallet?  Of course not.

In situations like these, median gives the best approximation of the typical case – the average is not really very average.

Affiliate Disclosure
Posted by MrWAGNEEZY at 10:31 AM