The Road Not Taken (Logic Puzzle)

In Robert Frost’s famous poem, The Road Not Taken (sometimes mistakenly referred to as “The Road Less Travelled”), a traveler is faced with the difficult choice of which road he should follow.


This brings to mind a classic logic puzzle, with mathematical implications.


Here is my poetic interpretation of the puzzle.


I soon discover I have no clue
Exactly which road is which
I look to the right, and then to the left
My eyes begin to twitch


I still can’t tell which one speaks truth
And which one is the liar
They smirk at me, these pesky gnomes
That came out of the briars


I must determine what to say
It is a daunting task
To get the gnomes to reveal the way
What question should I ask?


Successfully getting these gnomes to show us which road to choose will take careful planning.  Since we have no way of knowing which gnome tells the truth and which gnome lies, we must be able to come up with a question that both gnomes would answer the same way.


Obviously, the direct approach (e.g. “Which road leads to untold riches?”) will not work, because the truth-teller would point to one road while the liar would point to the other road.


Therefore, we must ask an indirect question – one that incorporates both the truth and the lie.  We can accomplish this by asking one gnome to tell us which road the other gnome would point us towards.  (E.g. “If I asked the other gnome which road leads to untold riches, which road would he point to?”)


The logic here is that the truth about a lie gives the same result as a lie about the truth.


More specifically, if we happen to talk to the truth-teller, he will point to the wrong road because that is the road the liar would have pointed to.


On the other hand, if we happen to talk to the liar, he will also point to the wrong road because that is not the road the truth-teller would have pointed to.


In either case, the wrong road will be indicated, and we can choose the other road to travel on.

Earlier, I mentioned that this puzzle has mathematical implications.


Let’s deconstruct this puzzle into a similar mathematical question.


I hope you agree with me that telling the truth is positive, and lying is negative.


Consider mathematical operations that can be performed on two numbers.  Suppose one of the numbers is positive, and the other number is negative, but we DON’T KNOW WHICH IS WHICH.


Which operations are guaranteed to give us results with the same sign, regardless of which number is positive?


If we arbitrarily choose ±2 and ±3 for our numbers and use them to explore each operation, we get the following: 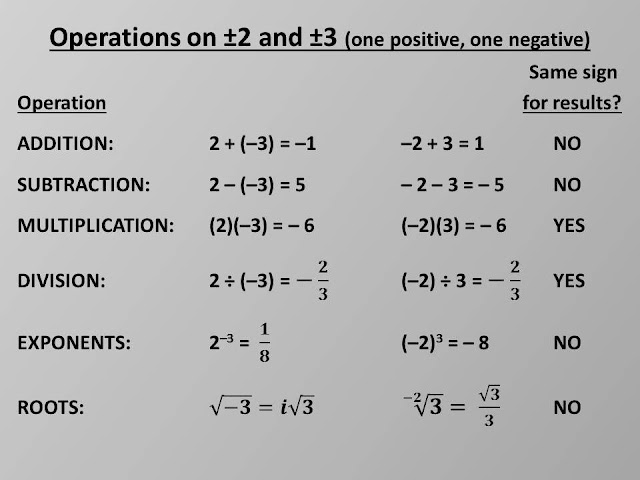 As we can see, multiplication and division are the only operations that fit the bill.


(Not coincidentally, multiplication and division have the same priority in the Order of Operations.)


seems to match up with the mathematical concepts